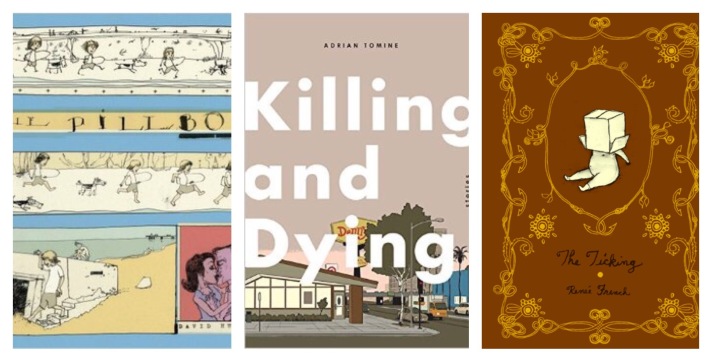 Thank the lord for the Guardian, and their wide coverage of graphic novels. Without them, I probably wouldn’t have heard of David Hughes’ weird and unsettling seaside tale.

The Pillbox contains interlinked two tales, based around a strange beach on east coast of England. The first is about Jack, a teenage boy on vacation with his parents, who finds an old abandoned pillbox on the beach. It is within this pillbox, that he meets two other young men, and has a weird sexual awakening. The second tale is a flashback to WW2, concerning the disappearance of a young man, and the tragic aftermath.

The narrative itself is really bizarre, but fantastic. But it’s Hughes unique drawing style that I found the most unnerving. But, as is repeated so many times within the story: “This is not a children’s picture book.”

The time Hughes takes to reveal the horrors greatly adds to the sense of unease. One of my favorite parts involves several double page spreads that show an old couple slowly making their way across a beach.

Make no mistake, this is an extremely disturbing, graphic, and harrowing piece of art. And it’s fantastic. The huge, lush pages are pleasure to behold. I could spend hours looking at the opening image of the seafront ice cream shops, and frequently find something new (half of which you can find below). 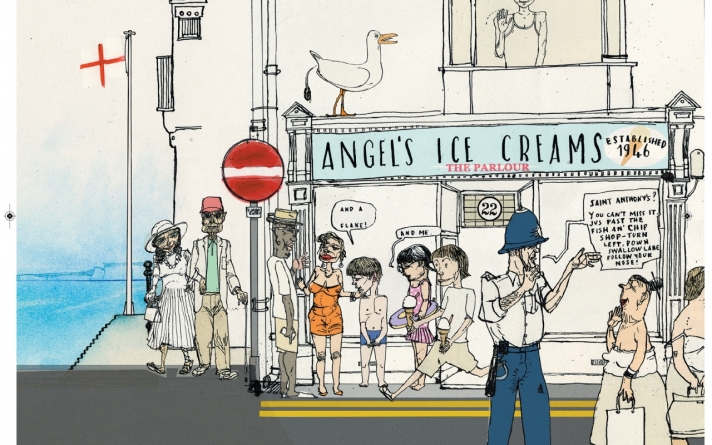 I’ve never read a graphic novel like it. Reminded me of The Wicker Man, The League of Gentlemen, and The Loney. Highly recommended.

The Ticking by Renee French

The Ticking a wonderful, pencil-drawn tale of an unconventional family. Edison Steelhead is born with a facial disfigurement, inherited from Cal, his father. Convinced his son would be able survive in the cruel, real world, Cal takes Edison to live in a remote lighthouse. As Edison’s life becomes increasingly strange, he seeks comfort in sketching the smaller details of the world around him.

As strange as Edison’s story is (and it really is very, very strange), he’s such a relatable character. Whether it be his strained relationship with his father, his impatience with his sister, or just a reluctance to change to comply to society’s expectations, I defy anyone not to see a little of themselves in this odd little misfit.

Renee French’s artwork is wonderful. The illustrations are so clear it’s as if this is a one-of-a-kind, hand-drawn book. There’s something about the simplicity of pencil-drawn art that really appeals to me. Especially when it is as beautiful as this.

Killing and Dying by Adrian Tomine

I’ve wanted this book ever since it was released. I read this story on Buzzfeed and was instantly enraptured. I wasn’t familiar with Tomine’s work, although looking at his back catalogue I don’t know how I’ve missed it. But in Killing and Dying he has perfectly created seemingly insignificant human episodes, but are just an absolute pleasure to read.

The collection is six stories from Tomine’s Optic Nerve series, and each tale is incredibly poignant. From middle-aged men with failing dreams (A Brief History of the Art Form Known as “Hortisculpture”), to an unfortunate case of mistaken identity (Amber Sweet), to domestic abuse (Go Owls), to an unfulfilling life (Translated, from the Japanese), to unconditional parental support (Killing and Dying), to obsession (Intruders), this isn’t exactly an uplifting read. However, there is a glimmer of redemption in each of the stories. This isn’t misery for the sake of misery; this is a fair assessment of the human struggle.

And if it wasn’t enough that Tomine has written these incredible stories, his illustrations are extraordinary. The way he reveals quite a huge plot point about one of the characters in Killing and Dying, through a gradual and almost imperceptible change in appearance, is both incredibly impressive and devastating. So clever.

Killing and Dying is the best book I have read so far this year, and is a strong early contender for my favorite graphic novel of 2016.

View all posts by traceyannthompson